Recently, I got invited to speak at DotFest – a .NET developer conference in Novosibirsk. Due to the COVID pandemic, they had to make the event online, so the organizers set up a test call with me to make sure everything is working.

During the call, we’ve noticed that OBS (great video streaming software) on my laptop doesn’t work. We needed to grab my screen and send it to a RTSP server, but everything I’ve seen in the OBS was a black screen. The same situation occurred when I tried to add a webcam image to the scene – also a black screen.

I’ve never seen this before – I am using OBS for years and it was always working pretty well – it’s a very reliable piece of software. But I’ve never used OBS on my new laptop before – I always stream from a separate device using my awesome streaming setup. 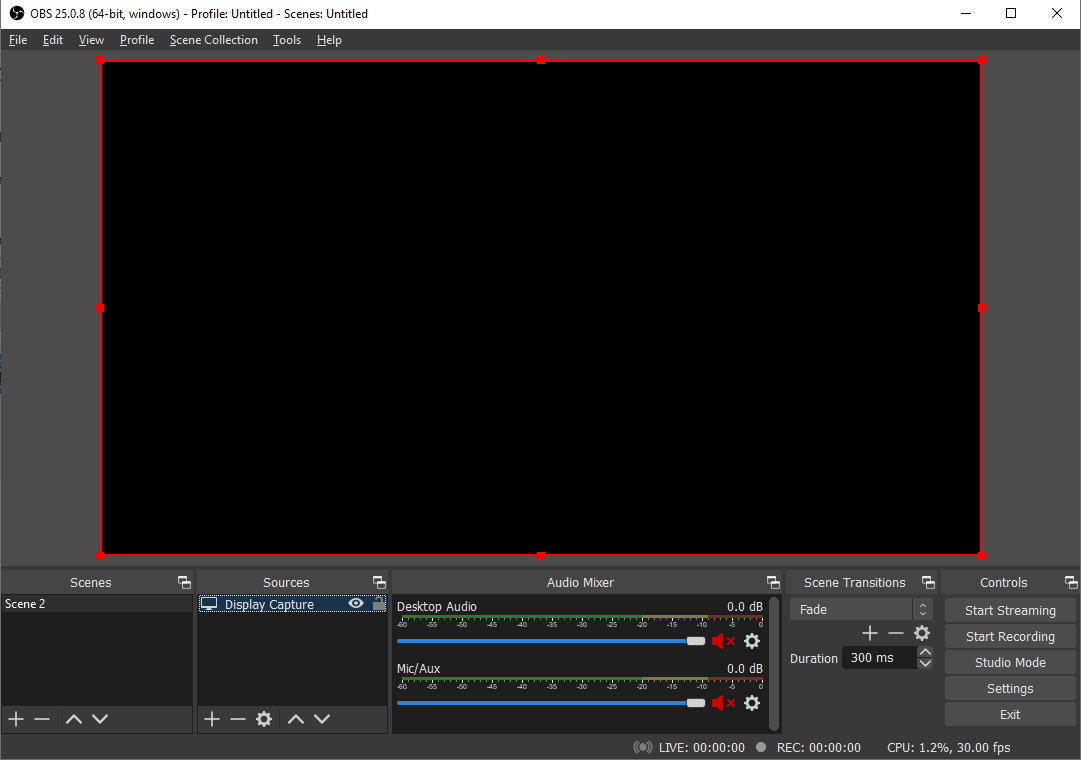 After googling a little bit, I’ve found this thread which described the problem and offered a working solution.

Since the thread is quite long, I’ve extracted the necessary steps including screenshots.

The problem is that my laptop has two graphics adapters – integrated Intel Iris Plus Graphics and also nVidia GE Force MX330. Windows has some automated algorithm to decide which adapter will be used by the app, and it chose the wrong one.

I had to go to Graphics Settings (in the Windows Settings app – just search for it in the Start menu) and create a preference for obs64.exe:

When I click Options, I need to select the integrated graphics (Power saving) card for display capture to work.

After restarting OBS, everything works well.

According to the forum thread, for game streaming or NVENC, you should probably select the High performance profile.

Building a device to record or live-stream my sessions

I have been speaking at various conferences and events for more than 10 years. Over the years, I tried several ways of recording my sessions. Most of the ways were just OK, but they were not 100% reliable, and it always bothered me when I did a conference with amazing sessions and some of them fail to record.

Recently, I have built my custom device that can do the entire recording or live-streaming job done without interfering with anything I want to present, and can be used on conferences where devices are changed frequently and each has a completely different setup.

But first, let me briefly list the ways I have been using, and point out their pros and cons.

Camtasia is probably the best software for screen recording. It comes with a simple editor where you can do basic processing of the video, and export it to common formats.

I was using Camtasia for a couple of years succesfully, however there are some things you’ll want to change in Camtasia settings, otherwise your recording can be easily ruined:

The main issue with Camtasia is that it drains the performance of your machine while you are presenting. It is not a problem if you only have PowerPoint slides, but if you need to use Visual Studio, Docker and other stuff during the session, your machine will be much slower than without recording. Two or three times, my laptop got overheated and just turned off in the middle of my presentation. The recording was of course lost completely as the temp file was corrupt.

If you organize a conference and want to use Camtasia, you will need to convince all speakers to install it, and I totally understand the speakers who won’t do it. It is always risky to install anything before the presentation, especially when you don’t know the software. It can interfere with the things you want to show, and finally, there is never enough time to do it before the presentation and test it properly – everyone wants to focus on the session and not spend time by installing something.

The first one can record VGA or HDMI on a SD card, the second one records HDMI on its internal hard drive. Be careful about the SD card you want to plug in – not all SD cards worked for me.

The advantage is that your device is not affected by the recording at all, and it is simple to use – just plug the frame grabber between your laptop and projector.

On the other hand, there are several problems with this approach:

All in all, this method failed me many times. I hardly remember a conference when 100% of recordings succeeded using this method.

On the other hand, my colleagues from Windows User Group are using this way for years and have successfully recorded hundreds of sessions.

Few years ago, one of my colleagues was doing some live streams with OBS, and that inspired me to build my own device for recording or streaming.

Of course, I could install OBS directly on my laptop, but that wouldn’t work on conferences which I organize (convincing the speakers to install and configure OBS on their machines).

Instead, I built my device from the following parts:

I have mounted the Intel Nuc on the back of the LCD display. Thanks to the fact that it is a touch screen, I don’t need mouse and keyboard connected.

I can then just connect the webcam, the grabber and the Zoom recorder in the USB ports (there is enough of them) and use OBS to record or stream.

I have tested the Elgato grabber that it survives when the screen resolution changes or Duplicate mode switches to Extend and vice versa. It survives even disconnecting and re-connection of any device, and I can always check what's being recorded or streamed in real-time thanks to the display.

The entire setup costs about $900, but it is the most reliable and flexible solution I have found so far. 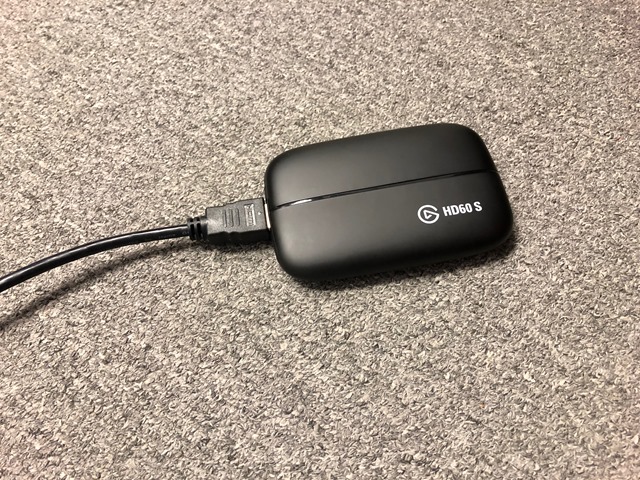 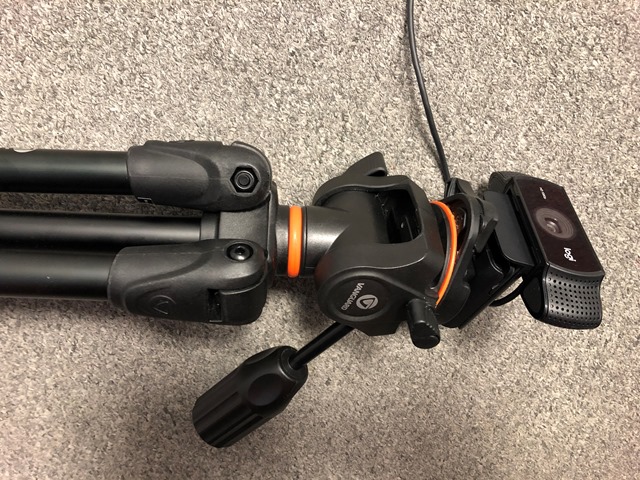 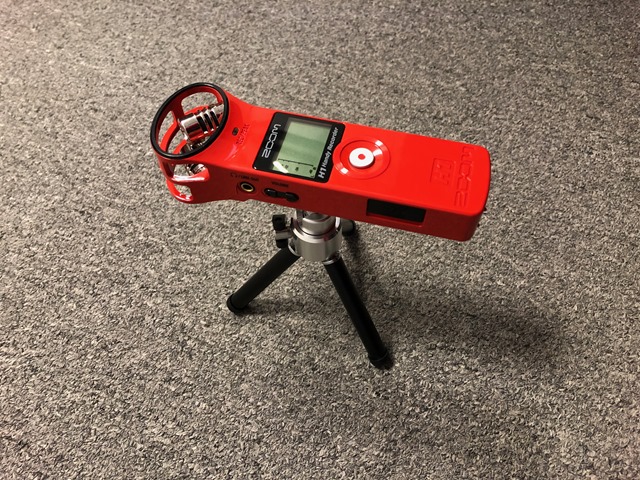 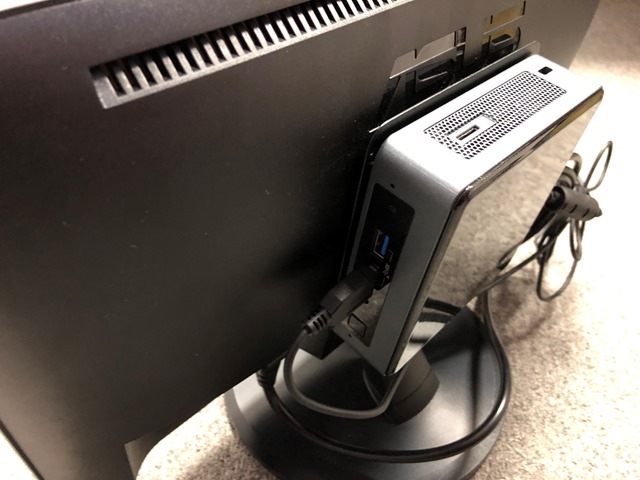 Since the webcam can be placed few meters away from the speaker’s post, I also recommend connecting it using an active USB 3.0 extension cable.

Here is a photo of my studio I have built in our offices. It is ready for the speaker to just sit down, plug the HDMI cable in their laptop, and start presenting. 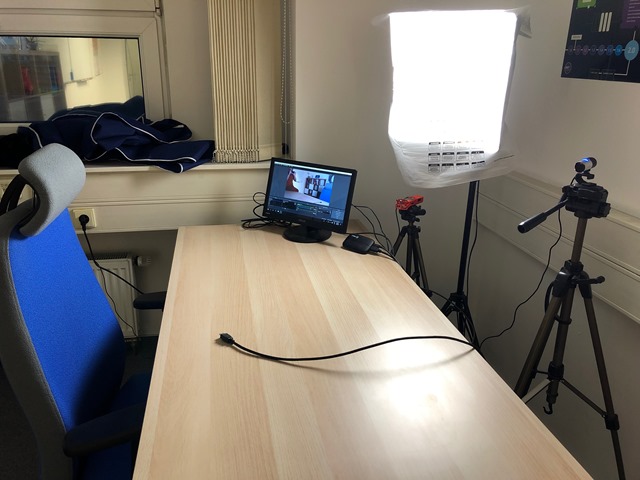 As I already mentioned, I am using OBS. It is an awesome open source project, and it proved to be very reliable.

You can define as many scenes as you want, and add any kinds of video or audio sources in every scene.

I have three scenes – just the screen, just the speaker or a combined view (I am using it most often). Also, for the live streams, I have a static scene for intro, intermission and outro. 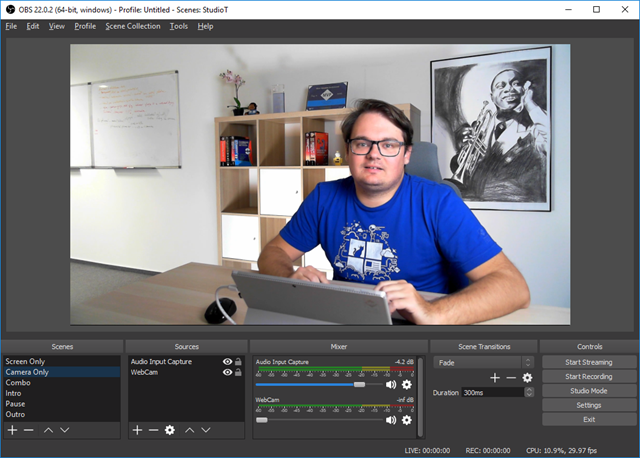 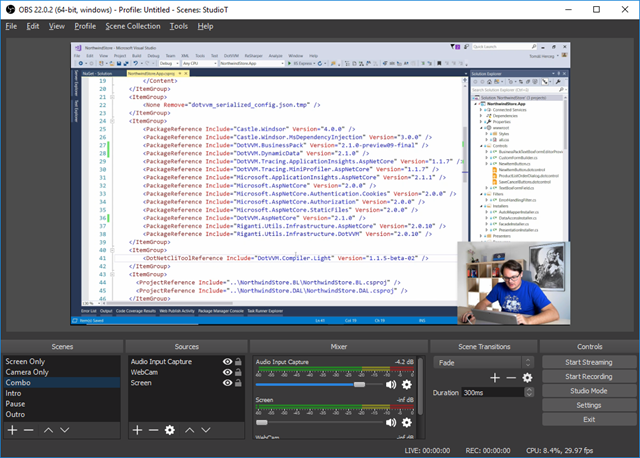 For streaming, you just need to enter the stream key in the Settings of OBS. OBS supports many streaming services. I stream on Twitch and then export the videos to YouTube (I often edit them a little bit).

When I just record, the videos are stored on the internal SSD drive I put in the Intel Nuc.

The videos recorded in OBS comes in FLV format. It can be changed, the reason for FLV is a support for missed frames which can happen, especially in streaming scenarios.

I use Adobe Premiere to edit my recordings, which doesn’t support FLV, but it is simple to convert FLV into MP4 using ffmpeg.

The conversion is very quick and it is loseless – the stream itself is not affected, only the container is changed from FLV to MP4.

We have recently started coding live with my friend Michal Altair Valasek, and had a great fun. This device helped us to do the stream right away without spending much time to prepare it, and I have used the device to record the sessions on our latest conference. We had some issues and one of the sessions failed to record because of a human error, but next time we’ll be more careful.

I believe that I have finally found a reliable and still affordable way to record or stream sessions from conferences I organize.

Last time, I have built a simple user interface for editing the events in my registration portal. This time, I will do a little bit of CSSing, implement the validation and show how Bootstrap for DotVVM can make your life easier.

Watch the live stream on Twitch.

The recording from the second live stream is here:

Few days ago, I have done a live coding session - in the first part, I was building the core of event registration system.

I really enjoyed it, so here is the date for the next session: Tuesday, December 19 at 6:30 PM (Central Europe Time).

This time, I will be building the core of the admin portal in DotVVM that will allow to manage individual events and reservations.

Slides and demos from my session at .NET Summit Belarus

Today, I have been talking about the dependency injection in .NET Core at .NET Summit, a new .NET conference in Minsk, Belarus.

Here are my slides and demos